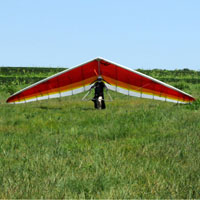 Nice job. Watch the turning close to the ground! Put your hands up higher so you are pushing "up" more and less "out". That will stop you and shorten all those run out landings. 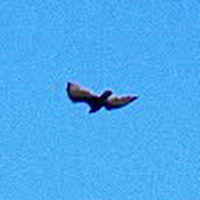 You're doing good there, but I agree with Blindrodie. You're getting by with your hands in about the middle of the downtubes, but your flare can't get but so "snappy" in this position. If you ever get caught in a nilwind or downwind situation, you'll probably need a well-timed, agressive, "snappy" flare. The extreme of this is the rear-wire flare, which is only needed in strong downwinds like sometimes found on the backside of a freshly released thermal.
Good job.
Top

I'll also echo Rodie's comment about the low final turns. It looks like all of these landings occurred at Dunlap. If so, you had a nice long slot to make use of in your approach - you should make better use of it. I think your landings may get even better (they're not bad, now) if you give yourself some extra time to mentally and physically prepare for the actual landing. Granted, there are LZ's which absolutely require short final turns, and it's good overall that you can perform such maneuvers, but taking available time to prepare for a great landing may help. 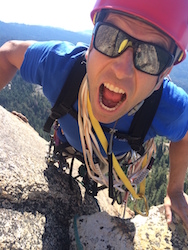 Thank you for the advice, much appreciated!
Top 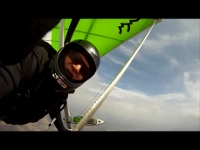 I've been landing poorly lately and started to read this thread from the beginning. It makes me miss Jim Rooney. A great pilot and teacher
Top

Pat Halfhill wrote:I've been landing poorly lately and started to read this thread from the beginning. It makes me miss Jim Rooney. A great pilot and teacher

Buy a large R/C glider that only has rudder, elevator and spoiler (RES) control and do only hand-catch landings.
This is what I did and it made a world of difference for my hang glider landings.
If you avoid using the spoilers, it makes the R/C hand catch landings even that much more effective at improving HG landings.
The dynamics of a polyhedral 125" span RES R/C glider are similar to the dynamics of a class 1 HG.
If you are able to get the R/C to zoom up from near the surface into you hand with little or no residual momentum it seems similar to executing a full flare.
I have stopped flying topless gliders and only fly the Sport 3 155 and Sport 3 170 new which do land a few mph slower.
I've made a number of tricky out-landings that had little or no margin for error and all were done safely.
I owe this to my RES R/C glider practice time from when I was recuperating from a series of shoulder injuries that ended my topless days.
It's a lot of fun and also helps stay current with thermalling skills when you're not in the air yourself.

Another thing that helps is doing mock landings while flying. Just don't do any full flares into tail slides. That may not be so helpful. End each practice DBF with a gentle stall.
Many pilots have reported to me how this has been helpful to them. I'm the only pilot I know who used the R/C glider technique. Would like to hear from others.

It's super easy with a Gentle Lady but it's still going to help and probably a fair amount. I do it with an Ava Pro 125" span and it's preferable not to use the spoilers.
What this did for me is make my mind focus very, very hard on the set-up which is something I seldom accomplished in over 1000 HG landings.
Even if it was a good landing it wasn't done with full mental focus and so it wasn't really a good landing when considered in terms of future landings.
The Ava Pro is expensive and fragile and so there is this big motivation to not blow it.
In case I realized I couldn't catch it then I needed to keep it from damage by the plethora of gopher mounds in my local glider park.
So I still needed total focus and set-up planning all the way until it came to a full stop.

Typically when trying to discuss landing technique with other HGs it turns into a BS and braggadocio-fest whether it's online or in the LZ.
The net result historically is that landings haven't improved much if at all. A very sad development.
As a consequence of this toxic environment within the sport I stopped caring about the whole issue.
I wonder whether this negative culture has contributed to the sport's demise. I really don't know.

You have raised a good point. Where I'm using a $1,200 competition R/C glider to help my HG landings by doing hand-catches over a poor landing surface, it may also be accomplished with much less at risk.
The whole purpose of the task of course is a form of brain training or neural programming but it's readily availble to everyone and can be done very inexpensively.

The other issue I often see is pilots who execute excellent set-ups and fail to flare fully or do a combination of flare and foot steps during the flare window.
I do believe that the R/C glider hand catches also help with this because if you don't commit to that last pull up on the joy stick you can blow the catch and the glider may cartwheel into the ground and get damaged.
So there is a similar mind-state required between doing a deep stall entry with the R/C as there is with flaring the HG.

Alternately, I feel there is nothing wrong with landing on a good set of wheels. I even modified a streamlined aluminum speedbar to accept the 8" Finsterwalder pneumatic wheels.
I will caution that a gentleman attempted to land on his pneumatic wheels at Andy Jackson Airpark and they stuck fast which resulted in a whack and donkey punch to the back of his head when he swung all the way through.
I broke his glider down then visited him in the E/R (claiming to be his nephew). I let him know that his wheels where almost fully deflated. They are designed to run at up to 35PSI and his were at maybe 2PSI at most.
He could have been paralyzed or killed by this error. His explanation ran along the lines of the wheels being more compliant with rough terrain if they were deflated. He never tested his hypothesis in a controlled study and paid for it.
So, everything has its limitations.

Put your hands up higher so you are pushing "up" more and less "out".

Hands up higher I agree on because you will move the CG further back, pushing up, not so much. There's some extreme athletes who can swing their body by rotating the shoulders, I and most other hangglider pilots are not among them. The sensation of pushing up comes from the glider rotating through the CG in the pitch plane and thus raising the uprights to a more horisontal position. You then end up with your hands above your head but those hands were lifted by the glider, not vice versa. Your feet is not in contact with the earth so there's not much of a leverage besides the momentum of your body. The clue is to time the flare so that the glider has energy to pitch up and not fight it by pulling in, but let your body swing back to a vertical position.
Top
Post Reply Previous topicNext topic
234 posts