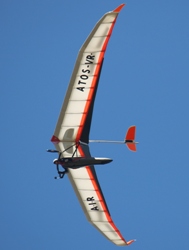 A flight I have been wanting to do for a while now. It's not often conditions cooperate to head to the S from Tekoa. No one has done this route before. (Well, I made it to Lewiston last year I was on my way to sinking out after launching. Had a low(ish) save to keep the flight going. (so glad I did!)
Got low a few other times. The sky was falling near Grangeville ID. It was an interesting sky.
Botched the landing as it had been NNW setting up to land. I didn't notice it was switching N then as I was landing it went due E. No harm done and a good lesson to always be ready and to pay attention!

Thanks!
Glad you enjoyed it. Ended up being my best flight of the season (it was a terrible season around here)
Top
Post Reply Previous topicNext topic
3 posts • Page 1 of 1